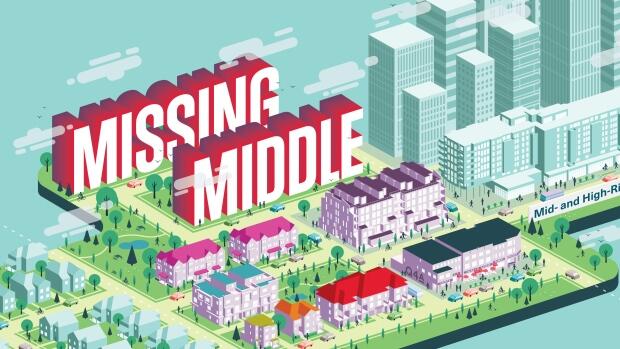 From CBC's MAy 23rd article:

Call it the tale of Toronto's two housing markets: on one side are the million-dollar-plus single-detached homes, and on the other, those tiny boxes in the sky.

What's missing, is everything in the middle.

"When you have a look at what's been produced, that's always been squeezed for preference of single detached or mid- to high-rise."

Paul Smetanin, president of the Canadian Centre for Economic Analysis, says the study took two years to complete, and was done on behalf of a number of Ontario construction firms. (Provided)

Tuesday morning, mayors from across the Greater Toronto and Hamilton Area (GTHA) will meet with developers and industry stakeholders to take a closer look at the findings. A panel discussion is set for 12:30 p.m. at Ryerson University, hosted by CBC Toronto's Dwight Drummond.

The report looks at more than 40 factors, dating back to the early 1980s, creating southern Ontario's housing crunch. It suggests much of the pressure is the result of several factors, including an increasing population, few housing choices and the many families forced into "worse options," such as buying when they should rent or moving farther away from their workplaces.

More than half of Ontarians are "over-housed," meaning they have too many bedrooms. The study says there are more than five million spare bedrooms in the province. More than 400,000 homes have three or more empty bedrooms.

One in eight Ontarians are "under-housed," meaning they don't have enough bedrooms.

Since 1990, rental stock per capita has fallen by 30 per cent in the GTHA.

During the last 20 years, about 10 times more condo units have been built versus purpose-built rental in the GTHA. One third of Toronto's condos are rented out.

"There is a significant amount of cash and investment money in the region," he said. "For instance, in 2001, we've been able to measure there was $50-billion in investment money coming from out of non-financial businesses in Ontario. Today that is seven times greater, at $350-billion."

"There is funds in the system that could be coordinated towards better housing solutions."

The right kind of housing

To help meet the demand, the study suggests about 600,000 new housing units are needed in Ontario over the next decade. But it's not just more housing; it's the right kind of housing.

And that's where the so-called missing middle comes in. The "missing middle" is also known as gentle-density housing types, including semi-detached, row homes, townhomes, multiplexes and courtyard apartments — all of which are lacking in Toronto partly because of zoning, the report says.

"A significant portion of the city only allows detached home, often referred to as the 'yellow belt' after the colour used on planning maps," the report said.

"It's part of the puzzle," said Coun. Ana Bailao, who is also the chair of the city's affordable housing committee.

Several studies are underway at city hall, looking at laneway housing, and adding more density — in the form of mid-rise buildings — along some popular avenues, including the Danforth

"This is the kind of development we need to push forward," said Bailao. "Right now you have a couple of wards with thousands and thousands of units being developed in 60, 80, 40-storey condos but we need to diversify."

A mix of housing types is a major component in the design of the Stanley Greene neighbourhood project in Downsview Park. At 178,540 square metres, it's the largest urban infill project in Canadian history.

Architect Marco VanderMaas says a variety of housing types 'shouldn’t be the exception, they should be the norm.' (Courtesy: Q4 Architects Inc.)

"For a long time the builders with the best floorplans were the most successful," said Marco VanderMaas, the director of design at Q4 Architects, the firm behind the Stanley Greene project.

"Now I think the builders with the best community plan will be most successful."

Part of that, he says, is a throwback to the past and taking elements from established neighbourhoods, like Riverdale or the Annex, and incorporating them in new communities. One of his favourites is the front porch.

"It's not just a place with a pillow," he said. "I think the porch that reaches out is just as important or becoming more important."